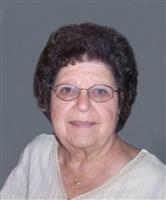 Myra Jo Brinkley, 78, of Morton, Ill., passed away at 1:04 p.m. Wednesday, April 22, 2015, at OSF St. Francis Medical Center in Peoria, Ill. She was born July 23, 1936, in Carrier Mills, Ill. She was raised by her parents, Charles and Berneda (Jamerson) McGill. She married Robie G. Brinkley, Sr. on June 23, 1952, in Marion. He preceded her in death on Nov. 24, 1991. She also was preceded by her parents and her father, Charles Riddle. Surviving are three daughters, Connie (Thomas) Stroud of East Peoria, Ill., Gay Lynne Brinkley of Morton and Janice (Sven) Kjelsrud of Livingston, Mont.; one son, Robie G. Brinkley, Jr. of Morton; 20 grandchildren; 23 great-grandchildren; two great-great-grandchildren; three sisters, Marie (Jerry) Turner, Mary (Bill) Gaines and Wilma (Lonnie) Dutton; and her aunt, Jenny (Don) Gowins. Myra and her husband owned and operated Brinkley Machine Co. before retiring. She was a founder and former owner of Formaloy Co. She loved gardening and raising tomatoes. She also loved to travel, fish and be with her family, especially her great-grandchildren. Visitation will be on Tuesday, April 28, 2015 from 4 to 7PM at Cox & Son Funeral Home in Ridgway. The funeral service will be on Wednesday, April 29, 2015 starting at 1:00 PM at the funeral home and visitation will be from 11:00 AM until funeral time. Burial will be at Leamington Cemetery in Junction, Ill. Memorials may be made to the American Cancer Society. You may leave a note of comfort to the family at www.coxandson.com
Visitation Tuesday, April 28, 2015
Cox & Son Funeral Home - Ridgway
4 to 7 PM

To order memorial trees or send flowers to the family in memory of Myra Jo Brinkley, please visit our flower store.
Send a Sympathy Card