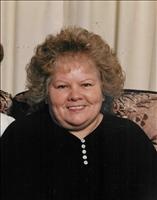 Nina L. Gowan, age 71, passed peacefully at home on May 12th. Nina was born April 6, 1938 in Leamington to the late Donald Brooks and Ala (Brooks) Miles. She married Bruce Gowan in November 1973, who survives. Throughout her years, Nina worked in many vocations; she was a coal miner, truck driver, donut shop owner and school bus driver (of which she held many fond memories of her ""kids""). There wasn't much she wouldn't try and she was always willing to lend a helping hand.

As many knew, Nina was diagnosed with ALS (better known as Lou Gehrig's disease) and put forth a valiant effort never giving up until the end. She was a wonderful wife, mother, grandmother, and friend. Nina will be greatly missed and forever in our hearts.

Nina is survived by her children, Lewis Franklin, of Evansville, IN, Susan (Roy) Bean, of Norris City, IL, and Brad (Angie) Gowan of Equality, IL. She is also survived by 6 grandchildren, Larry Towns, Shanen Franklin, John Towns, Krystal (Josh) Mitchell, Chelsea Gowan and Dylan Gowan; along with 3 great-grandchildren, Kaylie, Cainan and Peyton, along with two special buddies Dirk and Dax.

Also surviving are two sisters, Norma (Pat) Gibbens of Equality, IL and Nancy Glasser of Oak Harbour, WA. In addition to her parents, she was preceded in death by a brother, Mike Miles, and a sister Phyllis (Miles) Wilson.

Visitation for Nina will be Thursday, May 14, 2009 from 5 p.m. to 8 p.m. at Cox and Son Funeral Home in Ridgway, IL with the funeral service to be on Friday, May 15, 2009 at 1 p.m. at the funeral home. Interment will be in Leamington Cemetery. Chuck DePriest officiating.


To order memorial trees or send flowers to the family in memory of Nina L. Gowan, please visit our flower store.