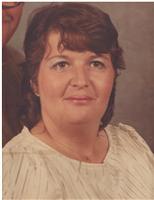 Patricia A. ""Pat"" Robinson, lifelong resident of New Haven died at her home on Monday, April 08, 2013 surrounded by her family. Pat as most knew her was born in Eldorado, Il on September 11, 1951 to the late George and Florence (Clifford) Johnston. On June 11, 1971 she was married to John Robinson who preceded her in death in 1986. She was a homemaker, loved to Knit and Sew, always was full of life and quite the jokester. But her main love in life was her family and taking care of all the children. She will be missed so much.

A visitation for Pat will be on Thursday, April 11, 2013 from 4:00 PM to 7:00 PM at the Cox & Son Funeral Home in New Haven. Per her request, she will then be cremated and she will inurned in the Union Ridge Cemetery near New Haven next to husband.

To order memorial trees or send flowers to the family in memory of Patricia Robinson, please visit our flower store.
Send a Sympathy Card