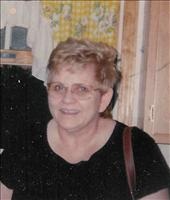 Phyllis Wilson age 67, of Rural Norris City, IL died Tuesday, July 7, 2009 in the Barnes Hospital in St. Louis, Missouri after an extended battle with Cancer. Phyllis was born on August 1, 1941 in Equality, IL to the late Floyd Pantier and Louis (Emery) Pantier Boutwell. Phyllis was married on June 5, 1960 to Gary Wilson who survives.

Phyllis had worked for many years before her sickness on a River Barge as the head of the food preparation. She loved to read, be amongst friends and Loved her children and grandchildren very much. She was a wonderful Mother, Wife, Grandmother and Friend, she will be missed so greatly.

Phyllis is survived by her husband, Gary Wilson of Norris City, IL, a Son, Terry Wilson of Omaha, IL, a Son Chuck (Sarah) Wilson of Burlington, Ky and a Daughter Nancy (James) Majors of Springboro, Ohio. Grandchildren - Brandi, Casie, Tawny and Sarah Wilson, Sophie and Olivia Majors. Many other cousins and Friends.


To order memorial trees or send flowers to the family in memory of Phyllis Wilson, please visit our flower store.