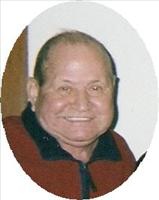 Rev. Grover T. Leonberger, age 71, longtime resident of the Saline Mines Community near Shawneetown, IL passed away peacefully Friday, August 08, 2008 at home surrounded by his family. Grover was born in the Saline Mines area on December 3, 1936 to the late Allen Leonberger and Virgie (Thorn). He was married first to Thelma (Capeheart) who preceded him death, on Feb. 20, 1987 he married Virginia ""Ginny"" (Smith) she survives.
Grover worked many years as Brick and Block Mason before retiring. He was called to the Ministry about 35 years ago and has been very faithful to the people of our area. He spent most of his years as a Minister at the Ohio Valley General Baptist Church where is a member.
He loved the outdoors, farming, raising animals, growing gardens and helping people.
He was a good husband, father, brother, grandfather and friend. He will be greatly missed by our community.

Preceded in death by his parents, first wife and sister Patsy Heffington

To order memorial trees or send flowers to the family in memory of Rev. Grover T. Leonberger, please visit our flower store.
Send a Sympathy Card