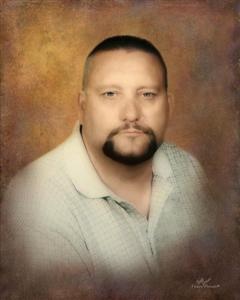 Richard L. Hesterly, age 49, of Ridgway, passed away peacefully at his home, Wednesday, February 20, 2008, surrounded by family. Richard was born on October 12, 1958 to the late Richard Hesterly and Delores Jean (Irons) who survives.

On February 10, 1992 he married the love of his life, Donna (Pfister). Richard worked at the Illinois Youth Center in Harrisburg as a Youth Supervisor II. He was President of AFSCME Local 779. He was a very faithful member of the Little Chapel Church. He was a good husband, father, son, brother and friend. He truly loved the Lord.

Visitation for Richard will be Friday, February 22, 2008 at the Little Chapel Church located at 3859 Hwy. 34 North, Harrisburg, Il from 2 PM to 8 PM. Funeral services will be Saturday, Febraury 23, 2008 at Little Chapel Church, starting at 11:00 AM with Rev. Jeff Rush officiating. A private burial will follow at the Jackson Cemetery near Ridgway.

In lieu of flowers the family ask donations be made to the Dylan Hesterly Trust Fund or the American Cancer Society. Envelopes will be available.

To order memorial trees or send flowers to the family in memory of Richard Hesterly, please visit our flower store.