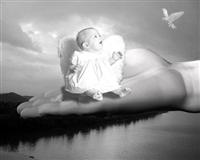 Riley Ray Rhodes, was stillborn on November 22, 2011 at 8:07 PM in the Methodist Hospital in Henderson, KY. Little Riley was the son of Matthew Rhodes and Whitney Moore both of Sturgis, Ky. Riley is survived by his parents, 2 brothers, Landon and Lathan Pierce, Grandparents, Teddy and Marlene Moore of Shawneetown, Kevin & June Wright of Sturgis, Ky and Randy and Lisa Drury of Morganfield, KY. Great grandparents, Helen Lane, Sharon Swearer and Gloria Morgan. He was preceded in death by a grandfather, Paul Rhodes. A graveside service will be on Friday, November 25, 2011 at 2:00 PM at the Westwood Cemetery in Shawneetown with Rev. Michael Rushing officiating. Those attending should go directly to the cemetery. Cox and Son Funeral in Shawneetown is entrusted with the arrangements. You may leave a note of comfort to the family at www.coxandson.com

To order memorial trees or send flowers to the family in memory of Riley Ray Rhodes, please visit our flower store.