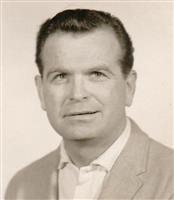 Roger Arnold Valter, age 83 of Ridgway, died Tuesday December 15, 2015 at St. Mary's Hospital, Evansville, IN Roger was born in Ridgway on November 27, 1932 to the late Arnold Valter and Ellen (Maloney) Valter.
Roger graduated from Ridgway High School where he was on the basketball and baseball teams. He then served in the US Army during the Korean War returning to Southern Illinois where he obtained his Real Estate license and has continued his real estate business for over 50 years. He built the Ridgway Post Office Building and had various other entrepreneurial ventures over the years.
He was active in the local community being a member of the American Legion, a charter member of the Fourth Degree Knights of Columbus Assembly 232 in Ridgway, as well as helping to promote and increase the prominence of our annual Popcorn Day celebration serving as the chairman in 1964.

In his early years, Roger enjoyed many summers water skiing and boating on the Ohio River with his cousins and classmates. He had a lifelong passion for horse racing and owned several race horses with his brother. His hobbies included photography particularly of sharing candid photos of friends and family with his instant Polaroid camera and was an avid reader of the Wall Street Journal sharing relevant stories with others in the community

He is survived by a son, Shawn Valter of Quincy, IL, a daughter, Sarah Jane Valter of Chicago, IL, a grandson, Jack Clisham of Chicago, IL and a nephew, Nicholas Valter of Hawaii. He is preceded in death by his parents and brother and sister in law, Darwin and Katsuko Valter.

Visitation for Roger will be on Sunday, December 20, 2015 at the Cox & Son Funeral Home in Ridgway from 5:00 PM to 8:00 PM where a Prayer service will be held at 7:00 PM followed by the Knights of Columbus Fourth Degree Chalice service. A funeral mass will be on Monday, December 21, 2015 at the St. Kateri Catholic Church in Ridgway at 11:00 AM with Fr. Steven Beatty celebrating. Interment will follow in the St. Joseph Cemetery in Ridgway with military rites.

Memorial contributions may be made to Pulmonary Fibrosis Foundation or St. Kateri Building Fund in his memory, envelopes will be made available at the funeral home.

Roger valued his many lifelong friendships........ his warm smile and distinctive voice will be remembered and missed.

To order memorial trees or send flowers to the family in memory of Roger A. Valter, please visit our flower store.