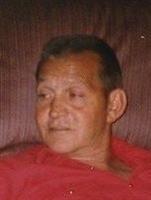 Ronald W. ""Moe"" Heffington, age 69 of Junction, IL died on Saturday, March 12, 2016 at his home. Moe as most knew him was born in Union County, KY on January 26, 1947 to the late Sammie General and Mary Glayds (Wolf) Heffington. Moe worked his entire life in the woods starting at age 14 with his brother Roger, logging timber. He loved to hunt and fish and be around his family. Moe had been a member of the Levee Pond Church in Cave In Rock.

Visitation for Moe will be on Tuesday, March 15, 2016 at the Cox & Son Funeral Home in Shawneetown, IL from 11:00 AM to 2:00 PM. His Funeral will immediately follow at the funeral home starting at 2:00 PM. His cousin Rev. James ""Buzzy"" Lovell will officiate and Moe will be laid to rest in Hogan cemetery next to his family.

To order memorial trees or send flowers to the family in memory of Ronald Wayne 'Moe' Heffington, please visit our flower store.
Send a Sympathy Card