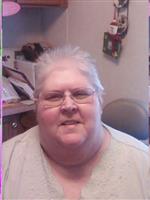 Rosemary Blake, age 66 of New Haven died on Saturday, June 21, 2014. Rosemary was born in Eldorado, IL on January 19, 1948 to the late Arie and Edith (O'Neil) Ackley. She was a retired cook from the Ingram Company Barge Lines. Rosemary love to Cook, watch Westerns and Cooking shows, be on Facebook, but mostly loved to be around her family. She was a good mother, grandmother, sister and friend and will be missed.

Rosemary is survived by a son, Bill (Brenda) Blake of Carmi, a daughter, Vickie (Billy) Hansbrough of Eldorado, 8 Grandchildren, Charity, Hannah, Zach, Hunter, Bayli, Kelsea, Brittny, and Rachel, one great Grandchild, Avani. A brother, Robert Ackley and a sister Donna Jean Bruington both of Jacksonville, IL She was preceded also in death by a brother Don Ackley.

Visitation for Rosemary will be on Tuesday, June 24, 2014 at the Cox & Son Funeral Home in New Haven from 10:00 Am until 1:00 PM. Her funeral will immediately follow at the funeral home at 1:00 PM with Rev. Ken Ragers officiating. Interment will follow in the Union Ridge Cemetery near New Haven.


To order memorial trees or send flowers to the family in memory of Rosemary Blake, please visit our flower store.