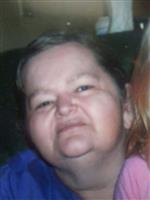 Sherryl L. Gordon, age 57 of Shawneetown passed away unexpectandly on July 5, 2014 at her home. Sherryl was born on September 14, 1956 in Evansville, IN. Her parents were the late Eugene and Patsy (Brown) Stewart. She was married to Melvin Gordon who preceded her in death.

Sherryl enjoyed family especially her husband and her grandchildren. She loved Roses and going out to eat. She was a good wife, a loving mother and grandmother and will be greatly missed.

Sherryl is survived by 2 daughters, Tori (Jeff) Dorries of Marion, IL and Jessica (Terry) Williams of Fayetteville, NC. 9 Grandchildren and a brother, Larry Stewart of Evansville, IN

Per Sherryl's request she will be cremated and she will be laid to rest in Tennessee with her family at a later date.


To order memorial trees or send flowers to the family in memory of Sherryl L Gordon, please visit our flower store.
Send a Sympathy Card