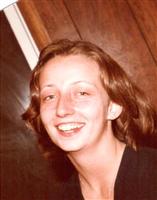 Stephanie Golden, age 54 of Shawneetown died Monday, August 21, 2012 in the Harrisburg Medical Center after a courageous battle with cancer. Stephanie was born in Eldorado, IL on November 14, 1957 to the late Dale and Anna Mae (Doerr) Golden. Stephanie worked most of her life on the farm helping her brother, had managed Bicketts in Old Shawneetown for many years and up until her death was looking after many oil wells. She loved to be outside and fish but her real passion was her animals, especially her dogs, Leroy, Brutus and Hannah whom she loved. Stephanie was a very giving person who enjoyed her friends and family. She was a good daughter, sister, aunt and friend and will be missed.

Stephanie is survived by 3 sisters, Marie Hise of Shawneetown, Rose Golden Cox of Harrisburg and Toni Golden Glover of Equality and her brother Kevin Golden of Shawneetown. She is also survived by nieces and nephews, Chris (Jeff) McCabe, Teresa (Kenny) Back, Angela (Shannon) Randall, Carol (Lori) Hise, Terri Gentles, and Mike (Paula) Hise. Many cousins. She was preceded in death by her parents and her companion, Mark Kohl.

Private services will be held for Stephanie at her request and she will be interred in the Westwood Cemetery near her parents.

Cox & Son Funeral Home in entrusted with the arrangements and you may leave a note of comfort to the family at www.coxandson.com


To order memorial trees or send flowers to the family in memory of Stephanie Golden, please visit our flower store.