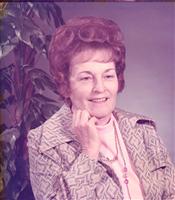 Tillie M. Dillard Heath Mayberry, age 92 of Shawneetown, IL passed away on Friday January 14, 2011 at the Harrisburg Medical Center. Tillie Marie was born May 23, 1918 through the marriage of George Walter and Mabel Patrick Dillard, farmers in the New Market and Hulda Lake area. Tillie was born in the Hulda Lake area and was the sixth of seven children, five girls and two boys.

Tillie was joined in marriage to Arthur ""Straw"" Heath on March 28, 1937. Their marriage license was the first issued in Gallatin County after the 1937 flood. To this union was born three children: Carolyn June Heath of Raleigh, NC, Arthur Lee Heath of Shawneetown, IL and Ronnie Gail Heath of Dallas, Texas. Prior to this marriage, Tillie gave birth to her first son, Billy Joe Crunk, whose father was Joe Crunk of Shawneetown. Tillie later married Lowell Mayberry of Norris City, IL on April 11, 1973. There were no children born of this union.

Tillie in her later years, embraced the Jehovah's Witness faith and was baptized. Tillie was preceded in death by her parents, 2 brothers, Lawrence and Cletus Dillard, 4 sisters, Blanche & Sherman Rider, Ruth and Lester Gladison, Maggie and Gene Crane, and Geneva and James Williams also one son Ronnie Heath and one grandson Tyler Heath.

Funeral service for Tillie will be on Monday, January 17, 2011 at 1:30 PM at the Cox and Son Funeral Home in Shawneetown where the family will receive friends after 10:30 AM. Rev. Robert Patton will officiate and she will be laid to rest in Westwood Cemetery.


To order memorial trees or send flowers to the family in memory of Tillie M ""Heath"" Mayberry, please visit our flower store.
Send a Sympathy Card