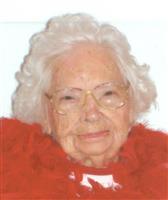 Velma C. Wiltshire, age 104 died peacefully on June 22, 2013 in the Fountainview Nursing Home in Eldorado. Velma a lifelong resident of Gallatin County, was born on January 2, 1909 South of Equality to the late Cecil and Josephine (Talbott) Wathen. She was married to Carl Wiltshire on November 10, 1932 and he preceded her in death in 1979.

Velma was a lifelong member St. Kateri Catholic Church, St. Joseph Chapel in Equality. She was a very hard worker and lived on the family farm until she was 92 years old when she went to the nursing home. She always had a smile for you and was very kind. She was a good wife, mother, grandmother, sister and friend and will be missed.

Funeral service for Velma was private with Fr. Steven Beatty officiating. She was buried next to husband in St. Joseph Catholic Cemetery in Equality. The family asks donations in her memory can be made to the VNA Hospice in Eldorado in lieu of flowers.


To order memorial trees or send flowers to the family in memory of Velma C Wiltshire, please visit our flower store.