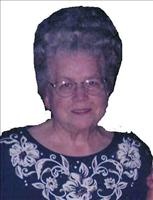 Verna Marilyn Upton age 74, longtime resident of Ridgway, IL died Sunday, April 19, 2009 in the Memorial Hospital of Carbondale. Marilyn as most knew was born in Taylorville, IL on June 8, 1934 to the late Vernon and Ruth (Young) Perry. She was married to Jr. Upton who preceded her in death. Marilyn was a good person always looking after the elderly and sick. She loved the outdoors and was always the happiest with her family. She was a member of the First Baptist Church in Ridgway. She was a good Mother, Grandmother, and friend. She will be greatly missed by her family and friends.

Along with 8 Great Grandchildren, she was preceded in death by her parents, husband and a brother, Tommy Thompson.

Visitation for Marilyn will be Tuesday, April 21, 2009 at the Cox and Son Funeral Home in Ridgway starting 11:00 AM to 1:00 PM with a Graveside Service to immediately follow at the Asbury Cemetery North East of Ridgway. Rev. Rob Gallion will officiate.


To order memorial trees or send flowers to the family in memory of Verna Marilyn Upton, please visit our flower store.