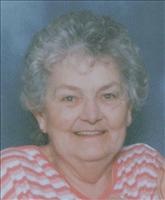 Wanda was born on October 29, 1938 in Harrisburg, IL to the late John Woodrow and Bessie Marie (Meachum) Hathaway. She was married to Edward Eubanks who survives. She is a longtime member of the St. John Vianney Church in Lockport where served as a Eucharistic Minister. She was a longtime employee of Milne Grove School serving as a lunch lady. Wanda retired from Mother Theresa Nursing Home in Lemont in 1996.

The family will receive friends in Lockport on Wednesday October 15, 2008 from 5 to 8 pm and mass of Christian burial will follow on Thursday at 10 am at the St. John Vianney Church in Lockport. The family will then receive friends on Friday, October 17, 2008 from 5 to 8 PM at the Cox and Son Funeral Home in Ridgway and a service will follow on Saturday, October 18, 2008 at 10:00 AM at the funeral home with interment at Jackson Cemetery in Ridgway.

The family asks in lieu of flowers that memorials be made to the Jackson Cemetery. Envelopes will be available at the funeral home.

On Line condolences can be left to the family at www.coxandson.com


To order memorial trees or send flowers to the family in memory of Wanda J. (Hathaway) Eubanks, please visit our flower store.