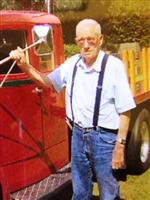 William J. ""Bill"" Downen, age 89, longtime Shawneetown resident died Sunday, December 21, 2014 at St.Mary's Hospital in Evansville, IN. Bill was born on the family farm North East of Ridgway on May 9, 1925 to the late Emmitt and Delilah (Wilson) Downen. In 1950 he married Donna (Patton) Downen who survives. Bill was self employed and had been involved in many facets of Downen Enterprises his entire life. He farmed, was involved with the coal mines, trucking, dredging and excavating. He loved to fish but his real passion was his old trucks especially noted for his Diamond T that he drove in parades and around the community. Bill was always a hard worker but always had a kind word and smile for you. He was a good husband, father, grandfather, brother and friend and will be missed.

Visitation for Bill will be on Friday, December 26, 2014 from 11:00 AM to 1:00 PM at the Cox & Son Funeral Home in Ridgway. His funeral will immediately follow starting at 1:00 PM at the funeral home with Rev. Wade Halva officiating. Interment will be in Asbury Cemetery northeast of Ridgway. In lieu of flowers the family asks that donations can be made to the American Cancer Society or Diabetes Foundation. Envelopes will be available at the funeral home.

To order memorial trees or send flowers to the family in memory of William J. Downen, please visit our flower store.
Send a Sympathy Card