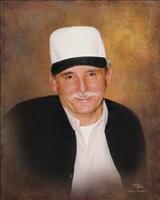 William E. O'Neal age 73, longtime resident of Ridgway, IL died Saturday, April 18, 2009 in Ferrell Hospital, Eldorado, IL after an extended illness. William was born in Junction, IL on October 25, 1935 to the late John and Marie (Taylor) O'Neal. William attended Hickory Hill School near Equality. On January 29, 1957 he married his wife, Marie (Millikan) O'Neal who survives. He worked for over 40 years in the Coal mines before retiring. William was a member of the UMWA. He loved the outdoors, fishing, hunting but most of all driving around the river bottoms. He was always busy and could fix almost anything. He was a good husband, Father, Grandfather, and friend. William will be greatly missed by his family and friends.

To order memorial trees or send flowers to the family in memory of William E Oneal, please visit our flower store.